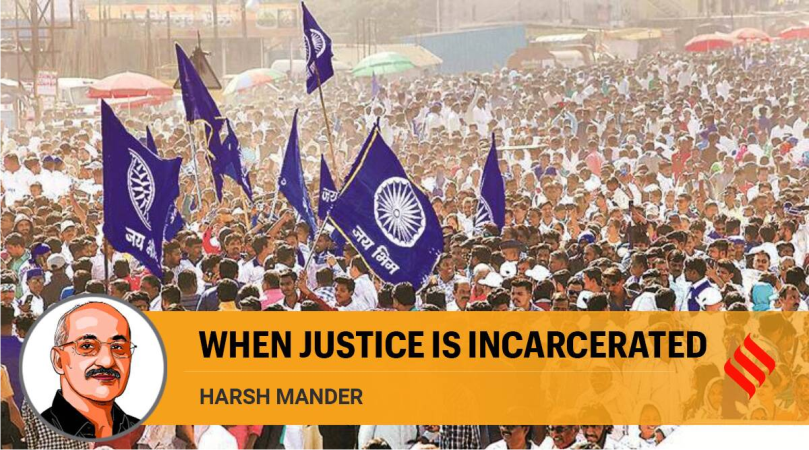 What does state’s treatment of pre-trial political prisoners tell us?

Harsh Mander writes: It’s been three years since Bhima Koregaon accused were incarcerated by a state that continues to oppose bail for them, despite Covid and other grave threats to their health.

June 6 was a sombre milestone — the third anniversary of the incarceration of five rights activists in the Bhima Koregaon conspiracy case. Eleven more were subsequently jailed for the same conspiracy. These 16 women and men — the BK-16 accused — are intellectuals, lawyers, a poet, professors, cultural and rights activists and an 84-year-old Jesuit priest, all with sterling records of service with India’s most oppressed people.

January 1, 2018 was the 200th anniversary of a battle fought at Bhima Koregaon, a small village in Pune district, where 500 Dalit Mahar soldiers of the British army defeated an army of the Peshwas. Dalits converged in thousands from across the state for its commemoration. But violence broke out and one person died. Initially, the police investigated Hindutva leaders Milind Ekbote and Sambhaji Bhide for instigating the violence, and arrested Ekbote briefly. But some months later, the police claimed that the violence was a conspiracy by left activists and intellectuals. The charge against BK-16 was that they had conspired to instigate Dalits into violent insurrection, and to assassinate the Prime Minister.

Three years later, the trial against them has still not commenced. The state has succeeded in misusing the law — with the complicity of all institutions of criminal justice — to confine behind bars the BK-16 accused, without any opportunity for either bail or to prove their innocence. The flimsy evidence marshalled against the accused rests on some alleged emails, but independent agencies contest that these are malign insertions though malware.

The experience of the BK-16 accused reveals the ease with which it is possible for the executive to smear reputations, and imprison indefinitely without bail or trial, people who dissent and organise struggles against state policies. During the pandemic, when governments globally have decongested prisons, the state has been steadfast in its opposition to bail for these pre-trial political prisoners, even after they displayed worrying signs of life-threatening illness. After a tortuous court battle, just one of them, poet Varavara Rao, was granted bail because of his critically deteriorating health.

Successive governments have introduced extraordinary laws that empower the state to imprison people charged with crimes of terror and insurrection almost indefinitely, without elementary protections such as the presumption of innocence until proved guilty, the right to bail, and the opportunity in a reasonable time to establish their innocence. In recent decades, these laws were widely used to jail young Muslim men charged as terrorists, and Dalit and Adivasi protestors charged as Maoists. Courts have in recent years released scores of these men, acquitted as innocent after spending sometimes 10, sometimes 20 years in prison.

The present government is now using such laws to criminalise dissent, to charge dissenters with grave crimes of terror and treason, and simultaneously to absolve right-wing militants for violence. The same playlist has been used in the Delhi communal violence of 2020. BJP leaders who instigated violence with hate speech, a partisan police, and Hindutva mobsters have all been absolved of their responsibility for the violence, and instead charges of insurrection mounted against participants in the peaceful resistance to the Citizenship Amendment Act 2019.

Equally worrying is the punishment by process of the BK-16 accused. To speak on a phone, or get a sweater or books or a commode chair, is a challenge. They are housed in the overcrowded Taloja and Byculla jails, ideal sites for super-spreading the Covid virus. The majority of jail staff, including all the kitchen staff in Taloja Central Jail, have tested positive. Many BK-16 prisoners, including the aged Stan Swamy, are denied vaccination because they lack an Aadhaar card. The jail hospital is no more than a set of dingy rooms with beds, run by Ayurvedic doctors.

Hany Babu, who teaches in Delhi University, developed an ugly infection in his eye, which spread to his cheeks and forehead, suggesting black fungus. There was no water in jail even to wash his eyes, and he had to wipe these with a soiled cloth. It took many days of pleading by his lawyers, and a public campaign, to persuade the jail superintendent to agree to finally send him to hospital.

When Sudha Bharadwaj went into prison, she suffered from several co-morbidities, like diabetes, hypertension and a history of pulmonary TB; in jail she has added many others. But the jail superintendent declared that she had the “habit of complaining”. Born to senior academics in the United States, Bharadwaj chose to give up her American citizenship to live and work with mine workers in Bhilai. She trained in law after she observed the comprehensive denial of their rights. For the police to charge her with planning Maoist violence is an outrage. For the jailer to dub this stoic, brave activist a complainer is a disgrace.

Equally disgraceful was the decision to charge Stan Swamy, a Jesuit priest who has devoted his life to the Adivasis of Jharkhand with Maoist conspiracy. When he went to jail, he had Parkinson’s. He told his colleagues recently that he had a fever, a cough, a running stomach. He appeared to be sinking. He said firmly to the court that all he wanted was to be back in Ranchi on temporary bail, else he would die in prison. He was finally shifted to a church hospital, which found him infected with Covid.

I am haunted these days by the disconsolate words I hear from the brave family members of BK-16. Once you are a prisoner, one observed, there is no value for your life. The agenda of the state, another feared, is not to ensure that political prisoners are kept well. Are they being sent to jail only to die?