The Anti-Caste Campaign aims to call attention to the continued structural oppressive operations of the 3000 year old caste system and to specific caste-based atrocities in contemporary India and in the U.S.A.

"turn in any direction you like, caste is the monster that crosses your path. You cannot have political reform, you cannot have economic reform, unless you kill this monster."

What is the Indian caste system?

The caste system is a social hierarchical structure that perpetuates discrimination and stigmatization based on a caste status or caste identity. A caste identity is hereditary and a permanent social identity of a person. There is no scope for upward mobility in the caste hierarchy, caste identity is entirely different from class identity. Caste is an integral part of Hindu religion and justified by religious texts such as the Rig-Veda and Manusmruti, which are ancient Hindu scriptures. Caste serves to perpetuate the economic and social suppression of large sections of the population, specifically, Dalits and tribal peoples. Today, this graded inequality is rooted in a fundamentalist form of right-wing Hinduism known as Hindutva.

Ideologically, the caste system justifies the practices of segregation, stigmatization, and violence against Dalits, Adivasis (indigenous), and non-Hindus as part of dharma or natural law.

Why is ICWI focusing on an anti-caste campaign?

An anti-caste ideology takes an unwavering stand against the caste system that oppresses, dehumanizes, and exploits the oppressed castes with impunity. An anti-caste approach means working to unite people across castes from all religions to demand an end to all discrimination, inequality, and oppression based on caste, integrating this stand into everyday life, and works towards sustainable long-term social and political change. It means standing in solidarity with Dalit-Bahujan-Adivasi communities and their movements, working to end caste-apartheid, caste-based gender violence, and ultimately the annihilation of caste.

At its core, the caste system places unequal value on human lives. This structured inequality alone is unacceptable to us. Anyone who is not a caste Hindu is treated as a dispensable Other, subject to discrimination and brutal violence, including routine lynchings, murders, and rapes. These crimes go largely unreported and even when reported, very few gain justice.

An anti-caste person or campaign takes an unwavering stand against all discrimination, inequality, and oppression based on caste, integrates this stand into everyday life, and works towards long term changes.

Soon after the Hathras rape case in September 2020, we started with the petition, which involved a signature campaign, a press release including video recordings with strong statements from prominent scholars and activists including Professor Angela Davis condemning caste-based violence against Dalits and Muslims, and a publicity campaign that succeeded in carrying the statement in a number of Indian news outlets, both in English and translated into several other Indian languages, including Hindi, Bengali, Gujarati, and Marathi.

For the latest Updates, Check our Social Media

June 14, 2022
Join us for the second annual Reclaiming India Conference, with the topic: Confronting Caste in Education! By registering for the conference, you will have access to the links for both days as well…

END_OF_DOCUMENT_TOKEN_TO_BE_REPLACED 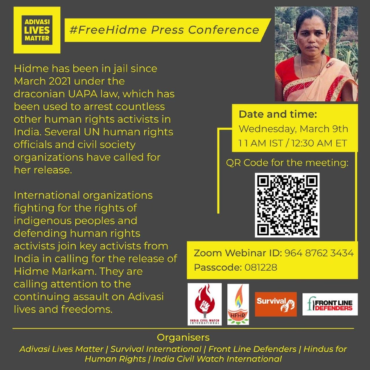 END_OF_DOCUMENT_TOKEN_TO_BE_REPLACED

March 8, 2022
A group of diasporic and India-based organizations are coming together to plan a press conference on the one-year anniversary of the arrest of Adivasi (Indigenous) environmental and human rights activist Hidme Markam. India is…