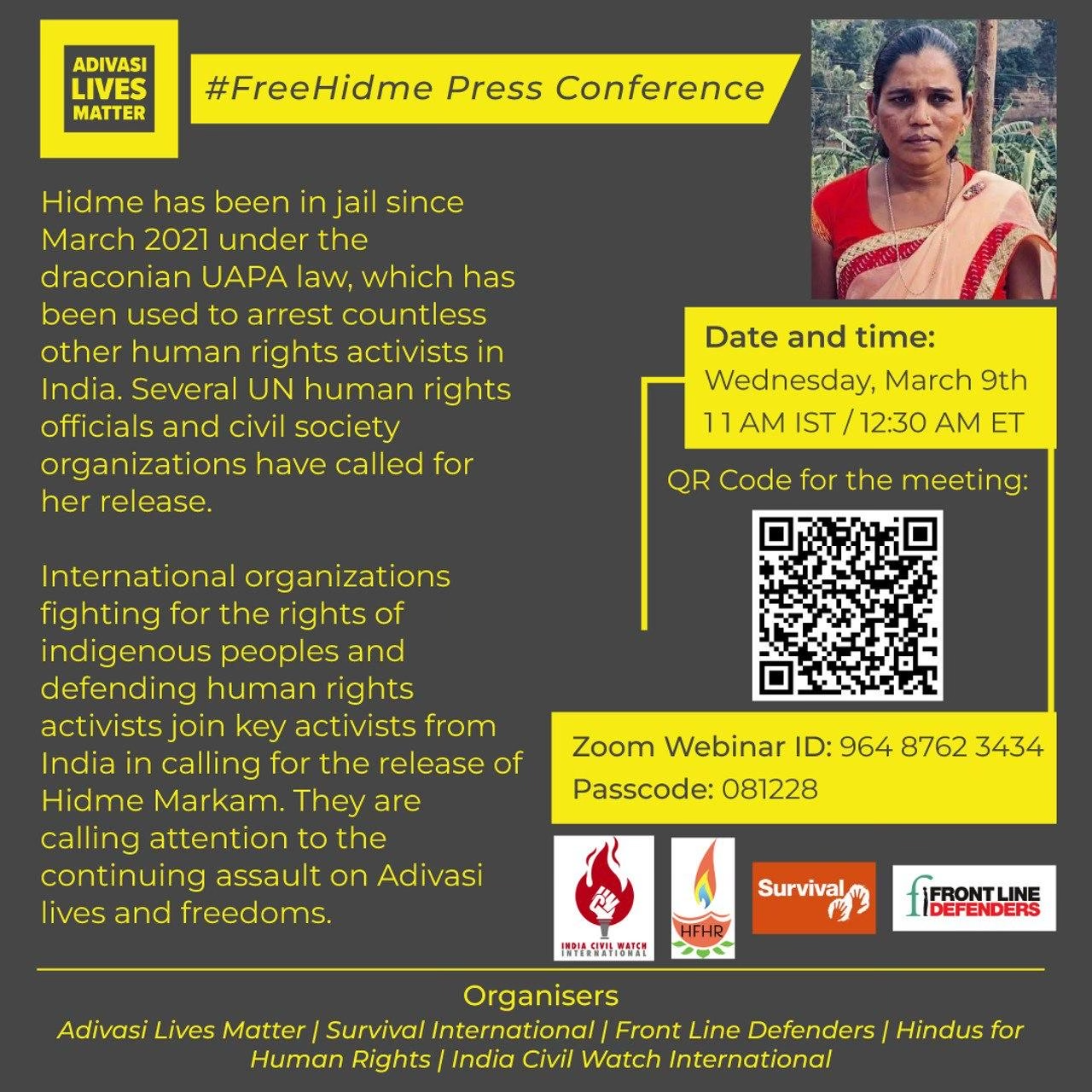 On the one-year anniversary of the arrest of Adivasi human rights and environmental activist Hidme Markam, a coalition of international and India-based organizations held a press conference highlighting continuing attacks against Adivasi lives, land, and way of life. Speakers called on Chhattisgarh Chief Minister Bhupesh Baghel to drop all charges against Markam and other wrongfully incarcerated Adivasis, and release them immediately.

Hidme Markam, a 29-year-old Adivasi activist from Chhattisgarh, was arrested at an International Women’s Day event in March 2021 under the draconian UAPA law, which has been used to arrest countless other human rights activists in India. For years, Markam has led efforts to free incarcerated Adivasi youth held in pre-trial detention, and to stop mining projects at the Nandraj Pahad hill, a sacred site for her Koya Adivasi community. Since her arrest, UN human rights officials and civil society organizations around the world have called for her release.

“We stand in solidarity with Hidme and all that this term embodies,” declared Deanne Uyangoda, Asia Pacific Protection Coordinator for Front Line Defenders, an organization that protects human rights defenders at risk around the world. The day after Markam was arrested, the organisation condemned the arrest and reiterated its “concern regarding the use of the UAPA against Hidme Markam and other human rights defenders in India.”

“The Indian government has managed quite successfully to target HRDs with impunity and with a certain callous disregard for the pushback locally, nationally, and internationally,” Uyangoda said.“What is particularly damning,” Uyangoda added, is “her [Markam’s] engagement with members of government on the very issues she is facing. The charges brought against her are about prolonging detention.” Given the scale of human rights cases in India, she noted, “attention is frequently diverted from individual cases, and that is something that governments are counting on.”

“It has taken a very strident movement to take on these forces,” said Adivasi journalist and activist Dayamani Barla, popularly known as the “Iron Lady” of Jharkhand. “Adivasis have had to keep raising the slogan that they will not allow a single inch of their ancestral land to be taken away. We will give up our lives, but we won’t give up our land.” Barla, the national president of Indian Social Action Forum, is known for her activism against Arcelor Mittal’s steel plant in eastern Jharkhand and writes for the Hindi newspaper Prabhat Khabar.

Soni Sori, Adivasi human rights activist and winner of the 2018 Front Line Defenders Award, raised questions about the legitimacy of the charges the Chhattisgarh police filed against Markam: “If there was a legitimate warrant, they would show us a court warrant. But despite being repeatedly questioned, they still haven’t shown us a court warrant … Hidme emerged as a leader and the government was scared. So they arrested her.” Sori emphasized that thousands of Adivasis have been arrested in a similar fashion to Markam. Sori herself was previously arrested in 2011 on false and fabricated charges, and faced torture and sexual violence while in prison. She was finally acquitted of six of the eight cases filed against her and released in 2014.

“Hidme’s arrest is part of a pattern of arresting Adivasi activists that we have been seeing in Bastar since 2005,” said Bela Bhatia, an independent writer, researcher, and human rights lawyer practicing in the district courts of Bastar, Chhattisgarh. “Since 2015, we are seeing the use of UAPA; if we include all 7 districts, the use of UAPA in Bastar must be the highest in the country,” Bhatia gestured. “Underlying this,” Bhatia explained, “is the large-scale militarization we are seeing in Bastar since 2005,” noting that estimates from a few years ago placed the number of armed troops on the ground at 1 lakh.

Dr. Jo Woodman spoke on behalf of Survival International, a global organization fighting for tribal peoples’ rights. On March 8, Survival International released a new report titled Brutalized for resistance: The assault on Indigenous women in Modi’s India. Woodman observed that “It is alarmingly normal for those who resist the takeover of their lands to be killed by security forces, their deaths sold to the media as the unavoidable outcome of encounters with insurgents. It is alarmingly normal for these security forces to storm into villages, to sexually abuse women, pillage supplies, kill and eat their domestic animals.”

“The central and state governments in India are enthusiastically enabling state and private mining corporations,” Woodman said. “If it weren’t for the riches lying under Adivasi lands, I think a lot of these horrors wouldn’t be happening,” Woodman said. Dr. Woodman closed by saying the atrocities against Adivasis seek “to teach Adivasi communities that they must obey. But what it actually teaches them is that the State is pitted against them, and values the resources under their lands, but not their lives, their cultures, or the rich forests that they have nurtured and protected.”