RE: Condemning the Saffron Flag on Parliament Hill, Ottawa

On November 1, MP Chandra Arya, marking Hindu Heritage Month at Parliament Hill, hoisted a saffron flag. The saffron flag (bhagwa dhwaj) was first used by the Maratha Empire, and was later adopted by VD Savarkar and other Hindu nationalist leaders to represent their political movement and later by Rashtriya Swayamsevak Sangh (RSS). Saffron is a color which symbolizes renunciation and spiritual dedication in Hindu, Sikh, and Buddhist traditions. Many Hindu traditions, including the color saffron, have been appropriated by Hindu nationalists.

The ritual act of dhvajarohanam, or flag-raising, is a common part of many Hindu temple festivals, marking the beginning of a celebration or auspicious period. We do not take issue with the dhvajarohanam ritual, the color saffron, or the symbol Aum. However, at a time when Hindu nationalism is on the rise across the world, including in Canada, we feel there are other ways that Hindu Heritage Month could have been inaugurated that would not be conflated with Hindu nationalist symbols: through an offering of prayer, the lighting of a diya (lamp), or planting a tulsi (holy basil) plant.

Hindu nationalism or Hindutva is a political ideology put forward by VD Savarkar and adopted by the RSS in 1923. It advocates for Hindu majoritarianism and Hindu supremacy, much like White supremacy here in North America. A homogenized majority is the hallmark of the ideology. Thus, briefly put, Hindutva is a right-wing Hindu nationalist ideology that promotes an exclusionary vision of India as a Hindu homeland.

We, the undersigned, strongly condemn the hoisting of the Saffron flag on Parliament Hill in Ottawa because it represents ongoing hatred and violence towards minorities in India, which includes Muslims (200 Millions), Christians and Dalits. Since Hon. Ahmed Hussen, Minister of Housing, Diversity and Inclusion issued a congratulatory statement on the occasion of Hindu Heritage Month, several conscientious groups and individuals wrote to him, asking him to issue a statement dissociating Canada and the Ministry of Housing and Diversity and Inclusion from any connection with this flag.

Minister Hussen has yet to respond. In this and other instances, action and responses from those whose responsibility it is to ensure equality and act against hate have been circumscribed, not least for fear of being labeled ‘Hinduphobic’. Other concerned Canadians have withheld their dismay and outrage fearing such a characterization. It needs to be clearly stated and understood that Hinduphobia is a convenient epithet constructed by the proponents of Hindutva ideology. By conflating criticism of a state, policies and ideologies that have little to do with religion and much more about triumphalist politics and ideologies, they exploit established genuine concerns about racism and Islamophobia. Allegations of Hinduphobia have in fact not been about an attack on Hinduism and on Hindus for their religion. This type of manipulation is akin to that by those who put forth “White Lives Matter” or attacks on feminists by masculinists. Criticisms of the Catholic church with regard to residential schools are not seen as Christianphobic. The same holds true for criticisms of Hindutva.

This is not the first time we see Hindutva activity in Canada and it is not the first time there is an accusation of Hinduphobia. In a strategy to silence a brilliant young filmmaker, Liberal MP Arya cited Hinduphobia and ignited a campaign against Leena Manimekalai and her film that led to violent misogynistic backlash against her, including death threats.

Hinduism encompasses a wide range of religious practices and beliefs observed by about a billion people around the world. The religion is heterodox; it is not homogenous. As the organization, Hindus for Human Rights puts it, “Hinduism welcomes other faiths and traditions” while Hindutva is built on “triumphalism over other religions.” Hindutva does not equate to Hinduism. Important therefore to note that the critique of the Saffron flag is directed towards it being a symbol of Hindutva. As stated above, labeling critiques of Hindutva “Hinduphobia” is deliberately misleading and disingenuous.

Hindutva, BJP and the current situation in India

To clearly understand the distinction between the broad religion, Hinduism, and the Hindutva ideology, let us look at the roots of Hindutva and its implications today. Founded in the 1920s, the leaders of the RSS, the fountain-head of Hindutva, were, in their own words, inspired by Mussolini and Hitler. Their tactics mirror that of fascist Italy. RSS is a paramilitary volunteer organization and the assassin of Mahatma Gandhi was one of its members, as is the current Prime Minister of India, Narendra Modi. Bharatiya Janata Party (BJP), the ruling party in India since 2014, is the political wing of RSS. The BJP, RSS, the VHP (World Hindu Council), as well as the numerous fronts of this Hindu right-wing family, such as the ABVP, [the student front organization on campuses in India], have brought about a violent, fundamentalist transformation to India’s body politic, whether in the Parliament of India, in the streets, in the provinces and/or on University campuses. Presence of Hindutva ideology outside of India is also well-documented. Hindu Swayamsevak Sangh (HSS), active in North America, for instance, clearly states that it is inspired by the RSS.

In India today, Hindu majoritarianism is flourishing under the current BJP government, in its second mandate at the federal level, as well as in several states. The attacks and violence on religious minorities in India, in particular Muslims, are escalating to a terrifying crescendo. Aside from legislative disenfranchisement of Muslims through laws like the Citizenship Amendment Act (CAA) and the National Register of Citizens (NRC), as well as various laws against trade in beef, inter-faith relationships, and “conversion,” there is the almost daily mob violence, including lynchings, by social vigilantes unchecked by the state or under state watch. Ministers and other elected officials of state and federal governments and prominent Hindu religious leaders are openly seen giving speeches inciting armed violence against Muslims. Instead of those who perpetrate this violence, Muslims have been arrested in disproportionate numbers, their homes bulldozed, and all with the absolute complicity of the police. Teachers, academics, journalists who are critical of these government policies have been hounded out of jobs. Hundreds of human rights defenders, journalists, lawyers, student leaders, activists have been detained for years without trial under draconian laws like the UAPA (Unlawful Activities Prevention Act).

Gregory Stanton, who predicted the Rwandan genocide and founded Genocide Watch, has warned that India is now at stage 8 of 10 to full-scale genocide.

At the recent Universal Periodic Review of India conducted by the UN Human Rights Council, UN member states raised concerns about violence against minorities, hate speech, and draconian laws in India. Canada strongly recommended protection of religious minorities by investigating all cases against Muslims, and condemning such cases. Canada also recommended strengthening of media freedom and ensuring UAPA is made compliant with International Human Rights Law.

Canada’s own position on the Human Rights situation in India warrants an action here on Canadian soil against any act or symbol of hate and violence. Furthermore, Canada is not immune from the spread of Hindutva ideology. In addition to instances inciting hate and violence here in Canada, recent events in the US and the UK have shown how this dangerous ideology is also present in the diaspora communities. Action needs to be taken at the first sign of hate speech and hateful expression. Therefore, we, the undersigned South Asian diaspora organizations and organizations in solidarity, call on Minister Hussen, PM Trudeau and leaders of the federal political parties to:

a) denounce the saffron flag hoisting at the Parliament Hill
b) make sure any such incidents do not take place under the watchful eyes of the Canadian government.

The Honourable Pierre Poilievre
Leader of The Conservative Party Of Canada

Scroll: Reports say ‘evidence’ against Bhima Koregaon accused was planted – so why are they still in jail? 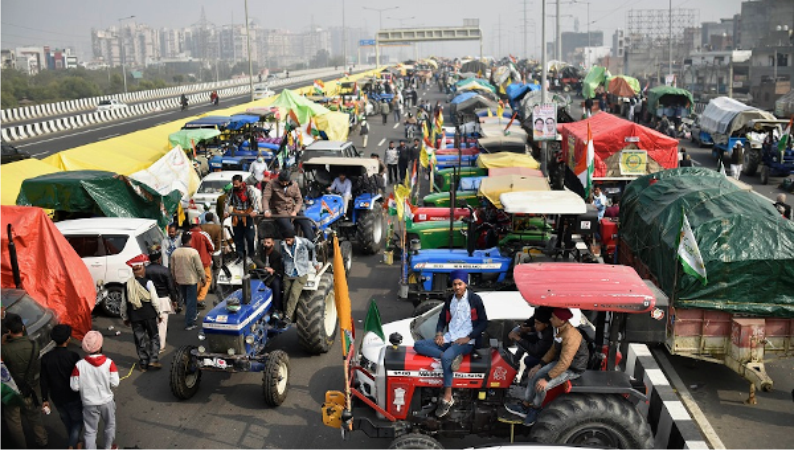 Whither Farmers’ Struggles in India?