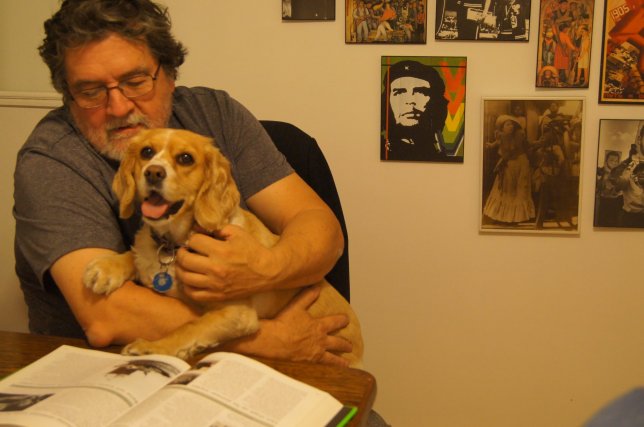 “Pierre was a great leader, an extraordinary thinker and had a big heart. The world will miss Pierre greatly.”

Just when we needed him most to explain how the global political reality will change with the Russian invasion of Ukraine, Pierre Beaudet, one of Canada’s most brilliant progressive thinkers and activists has died.

I met Pierre about twenty years ago when he invited me to sit on the board of Alternatives, a progressive international development NGO that Pierre helped found in Montreal in 1995.  He introduced me to international solidarity work through Alternatives and the World Social Forum.  In fact, he was part of the group that helped establish and grow the WSF, an extraordinary effort to build an alternative to corporate globalization.

He encouraged me to write about the struggle in Latin America and to go on a mission to Palestine. Pierre was a great leader, an extraordinary thinker and had a big heart. The world will miss Pierre greatly.

I went to several World Social Forums with Pierre in Brazil, Venezuela, and Kenya.  Pierre was also central in bringing the WSF to Montreal and organizing a Quebec/Canada/Indigenous social forum in Ottawa.  I’ll let him explain the importance of the World Social Forum, writing in Canadian Dimension:

“The WSF process was original because it was an open space where participants themselves were to define the agenda through self-organized political and cultural activities. Much of the work involved drafting an alternative economic program… At the same time, there was much discussion of how to “democratize democracy,” for meaningful citizen participation within the framework of liberal democracy. These immense brainstorming sessions were carried out by many social movements that also took advantage of the WSF to create new international and action-oriented networks, such as Via Campesina and the World March of Women. The WSF methodology was also adopted by hundreds of national and municipal forums in which citizens had a chance to act, play, speak out and express their hopes. It thus helped to bring movements together, create new dynamics and give rise to new projects. One such successful forum was organized in Ottawa in 2012. The Peoples’ Social Forum brought together a critical mass of movements from Canada, Québec and Indigenous communities for the first time in Canadian history.”

To pay tribute to someone I consider to be one of the most important thinkers and organizers of my generation, I spent the last couple of days interviewing a few of his closest comrades.

Monique Simard, a well-known Quebec feminist who went to University with Pierre and has been friends with him ever since told me, “His vision of international solidarity was unparalleled.  He had a global vision of politics. Pierre knew everything about everywhere not only about the big picture, but he could tell you about the details in each country.  The spectrum of his knowledge was so wide.  It was amazing.”

Pierre’s international solidarity work started in South Africa where he got so involved in the anti-apartheid struggle, he moved there but had to return to Montreal because of his mother’s ill health. He put his expertise on Africa together with comrades who were involved with struggles in South Asia and the Arab World to found Alternatives in 1995, just as the anti-globalization movement was beginning.  Not unlike the period we are in today, this was a moment where the global social and economic order was changing from the Cold War to neo-liberalism.

Robert David, who helped to found Alternatives and remained there in leadership positions until 2007 told me, “Every time you had a meal with Pierre, you’d get a lesson. He had a remarkable combination of political and strategic analysis and the ability to organize people around it and do it.  A very rare quality.”  Robert explained how Alternatives had a different approach to international work than most NGO’s with Pierre leading.

“He would tell the groups we worked with to write the proposal that would be accepted and then do what you really needed to do with it and explain later.”  Rather than act as an enforcer of government funding rules, Alternatives would be a co-conspirator with local groups, solidarity not charity.

Pierre was also one of the people in Quebec who worked hard to build solidarity between Quebec and English Canada.  André Frappier, a long-time trade union activist and leader of Québec Solidaire, a left-wing political party in Quebec, worked with Pierre on many projects and wrote me about his fondest memories.

“Pierre was a theoretician who contributed greatly to political discussion and debate, but above all he was an organizer, a builder of networks and places of activism. A committed activist against the power of the oligarchy, he kept an indelible memory of a 1968 demonstration in support of taxi drivers striking against the airport monopoly of taxis and buses by the Murray-Hill company. He was proud of the embedded projectiles from riot police fire on his lower back that remained there all his life.”

André also noted that Pierre, while a supporter of the national liberation struggle in Québec, was no less an internationalist. Initiator of the Alternatives summer university, he participated in creating spaces for discussion about international politics and the links between the left in Canada and Québec.

Pierre’s writing was featured in rabble.ca and Canadian Dimension over the years.  In 2017, Pierre wrote in The Bullet a response to the Leap Manifesto.  While supportive of the general idea, he pointed to a major weakness:

“However, there is a blind spot. Much like in the tradition of the Canadian left, the Leapists have ignored the fact that the Canadian state, from its creation till now, is not and cannot be the terrain of emancipation. This state is illegitimate. Its foundations are rotten, since it was erected on class and national oppression, whereas the First Nations on the one side, and the Québécois on the other side, have been dispossessed. To put it bluntly, this state has to be broken and eventually reinvented. Speaking about reforming Canada on the left does not make sense if unless that, from the onset, there is clear and explicit commitment to work with the First Nations and the Québécois by recognizing their right to self-determination and their nationhood.”

Talking to Pierre’s old friends and comrades, one of my favourite stories came from André Frappier: “Pierre was a passionate being and a walking, talking political school. Two years ago, I worked for two weeks building a new fence in his back yard.  Carpentry was not his strength, but while he held the boards I needed, he told me about his understanding of Lenin’s writings and the history of communism, as if he had a book in his hand.

“Pierre was a unique being, a builder, a weaver of networks, a hard worker who understood the importance of passing the torch. He continued the work of organizing World Social Forums in recent years with activists from the younger generation. “

And he also reached younger generations through his teaching at University of Ottawa and Université du Québec en Outaouais, his mentoring and his extensive writings.

Even though he received a PhD in 1990, he refused the comfort of an academic job until he decided to leave Alternatives in 2005. On Facebook, many of his students both in formal and informal settings talked about how much they learned from him.

Pierre is survived by his two sons Victor and Alexandre.  His former partner, Anne Latendresse, wrote on Facebook:

“Pierre, the father of my son, my accomplice of more than 30 years, left us on the night of March 7-8.  Death came to get him at home, without even waving at us.  We weren’t prepared…

“His heart was so big, that he carried the whole planet and hugged these suffering men and women and fought to transform the world.  With clarity, he was desperate for our inability to get there.  But from Gramsci, he had learned to practice “the pessimism of the intelligence and the optimism of will.”

Thank you, Anne, and know that we share your mourning for this wonderful man.

Note: Pierre Beaudet was a founding member of ICWI.